The Russian residential market will long be the driving force behind the whole construction sector due to the continued high demand of most of the country’s population for improving their housing conditions. Mortgage loans, the most common means for purchasing homes in Russia in recent years, have finally strengthened, which compensates for the crisis years of 2015-2016 in Russia. As there has been a major drop in the population’s income, and it persists, mortgage lending is the only way to increase home purchases. The mortgage market easily overcame the crisis of 2015-2016 in Russia and already in 2017 exceeded the peak indicators of the pre-crisis year of 2014. During the first half of 2018, the trend towards growth further strengthened: the volume of issued mortgage loans rose by 68%, and its share in the total number of housing transactions reached a record 54% in the primary market. All this shows the current high demand for mortgage loans. 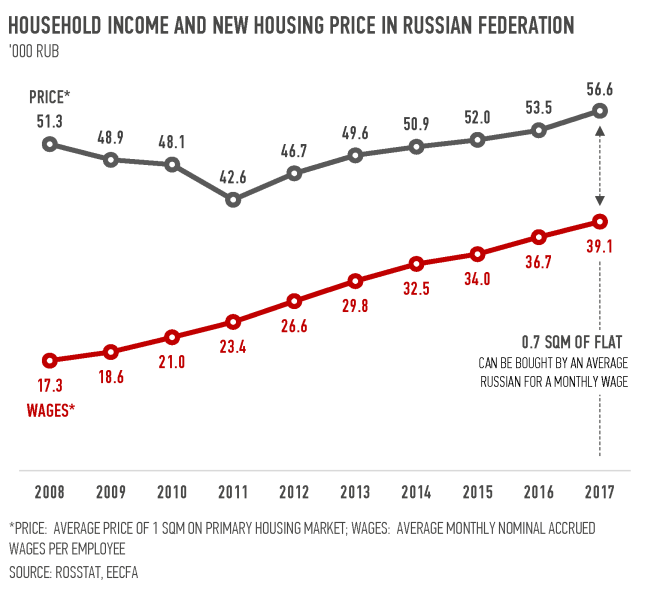 To explain the explosive growth in mortgage lending, the fundamental factors shaping the housing market need to be considered:

As per the Federal State Statistics Service of the Russian Federation, to date, the total housing stock in Russia is about 3.4 billion sqm, only slightly more than 23 sq km in terms of the country’s permanent population (146.9 million as of January 1, 2018) per person. This level can be considered low compared to most developed foreign countries (39 sqm/person in France and Germany; 70 sqm/person in the USA, 76 sqm/person in Canada). Minimally comfortable living conditions are achieved with a security level of at least 30 sqm/person as per the social standards of the United Nations, and it is the target of public housing programs in Russia. To ensure that the population’s living space has reached this target, while maintaining the country’s population at the current level, another 1.0 billion sqm of living space should be built. Thus, the low level of housing provision is the guarantor of the preservation of demand for new housing projects for a long term.

The second factor ensuring long-term demand for housing is the quality of the existing housing stock, which has more than 33% (or about 1.2 billion sqm) of housing built before 1970. Even with the record volumes of housing construction registered in Russia in recent years (in 2014-2017 about 80 million sqm annually) and even if it stays at the current level, it will still take at least 28 years to reach the minimum acceptable security and to fully replace the old housing stock. In general, housing demand in Russia will not be END_OF_DOCUMENT_TOKEN_TO_BE_REPLACED